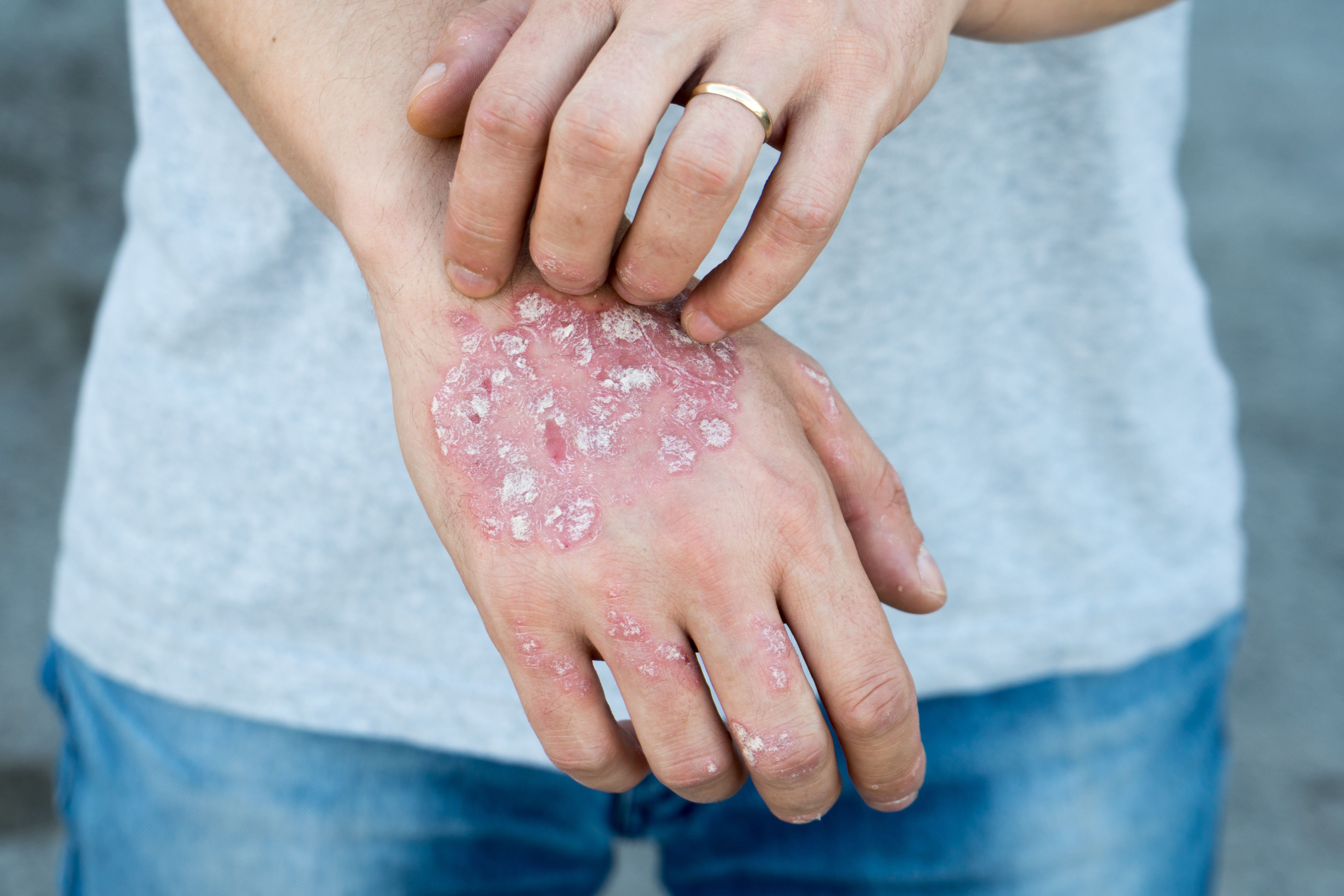 Psoriasis – an inflammatory skin disease
Psoriasis is a skin disease that causes raised, red, scaly patches to appear on the skin. The skin cells of people with psoriasis grow at an abnormally fast rate, which causes the build-up of psoriatic skin damage. At the same time, the immune system mistakenly attacks healthy skin cells. Usually, the affected skin areas are outside of the elbows, knees or scalp, but they can also appear in other areas – such as the eyelids, ears, mouth and lips, hands, feet and nails. The immune system and genetics play major roles in the development of psoriasis and usually there is a trigger that causes the psoriasis to flare-up. However, scientists still do not know exactly what causes psoriasis. According to current studies, psoriasis affects approximately 2% of the world’s population, and more than 450,000 Australians suffer from the disease. Psoriasis must be treated by investigating the underlying causes, taking into account that this disease is frequently associated with other serious health conditions such as diabetes, heart disease and depression.

Nutrition plays an important role in psoriasis
There are certain skin disorders where food-related aspects are involved in the origin of the disease such as psoriasis, acne, dermatitis or urticaria. Health experts and researchers agree that several nutritional strategies for the management of psoriasis are promising (such as fasting, vegetarian diets or diets rich in omega-3 fatty acids from fish oil). A healthy lifestyle combined with weight loss is beneficial for patients with moderate to severe psoriasis, and a close cooperation between nutritionists and dermatologists is necessary for the management of psoriasis. In addition, many health care providers agree that a diet based on a test for delayed food allergies – such as ImuPro – is helpful for the treatment of patients suffering from psoriasis.

Why choose delayed allergy testing for the management of psoriasis?
IgG is a defence protein generated by our immune system that can recognize a foreign substance (also called antigen). This antigen is identified by the immune system as an invader, having the potential to harm the body. To combat this, the body releases an inflammatory reaction designed to destroy the antigen. This is how the body fights bacteria or infection. Sometimes, food or food components (proteins or parts of proteins) are mistakenly identified also as invaders by the immune system that generates food specific IgG antibodies. They are combined with food particles and induce an inflammatory response. In the exact same way as a scratch or wound on your skin gets red and inflamed, the immune system’s effort is to get rid of the invading bacteria or dirt in the wound. But a food-mediated immune reaction remains unseen as it occurs inside your body. Continuous and repeated consumption of the same foods triggering these IgG-mediated hypersensitivity reactions may promote and maintain these silent, overlooked and painless chronic inflammations. IgG-mediated food hypersensitivity can therefore be a trigger factor for the development of diseases where inflammatory pathways are involved, such as psoriasis.

A few years ago, ImuPro undertook a clinical observation study, to collect evidence on the efficacy of ImuPro testing in patients with very different conditions that may indicate food intolerance. These included psoriasis, neurodermatitis, headaches/migraines, overweight/obesity, fatigue, rheumatic diseases or gastroenterological complaints. A total of 938 patients participated in this trial and 2/3 of the patients with psoriasis noted an improvement of their disease symptoms when they avoided IgG-positive foods for a period of 8 weeks. Other researchers discovered that some psoriasis patients have increased IgG antibodies against gluten (the wheat protein). When these patients followed a gluten-free diet, a very significant improvement of their symptoms was observed.

For these reasons, it can be expected that a test for the detection of IgG-mediated food hypersensitivity, followed by the ImuPro change in diet concept, could be helpful for the management of psoriasis.